So one thing I’ve learned throughout the Crazy Dana portion of my life is that Dana Rohrabacher and his staffers are absolutely brutal when it comes to anything pertaining to the Internet.

As a collective, they remind me of my Aunt Ruth on Facebook—unnecessary exclamation points, posting the same offerings twice in a row, skipping weeks, then being very active for five-straight hours. It’s all weird and lame and flat.

Today, though, it got downright pathetic.

Out of the blue, a new Twitter feed began this afternoon. It’s called “Radical Rouda”, and the bio reads: A radical leftist masquerading as a moderate in the pockets of #BillionaireBolsheviks who will say whatever he thinks the voters of #CA48 want to hear. 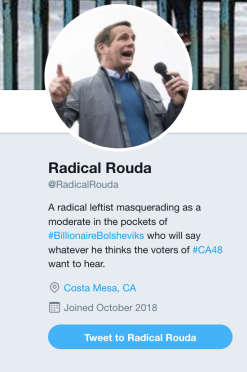 But what’s absolutely awesome about @RadicalRouda is its first-ever Tweet was immediately re-Tweeted by the official account of … Dana Rohrabacher. This happened before @RadicalRouda had a single follower; happened barely after the account was created.

Which means, with absolute certainty, @RadicalRouda was made by the Dana Rohrabacher campaign staff.

I love, love, love this. And now I will count the reasons …

• 1. How terrified must your campaign be to create a ghost account one week before an election.

• 2. How sad and inept must your team be to do it this poorly.

• 4. I just realized—the account links to a website. Here, take a gander. And, because of election laws, the bottom of the site notes, in the tiniest/faintest writing possible …

• 5. I’m actually gonna break character for a moment, and speak directly to Dana Rohrabacher. OK, here I do: Congressman, if by chance you win this election, fire everyone who works for you. They’re terrible.

• 6. Jesus. I just realized the main image on the Twitter feed is supposed to be, I suppose, a bunch of immigrants crossing a fence. Or something. God, this guy is such a turd.